Popular crypto exchange Binance is planning to enter the Chinese market with the launch of its new China website. This comes after Binance was forced to leave China following strict regulations that shut down all domestic cryptocurrency exchanges in September 2017.

Since then, mixed messages have been coming from Beijing. While financial institutions are not permitted to deal with crypto, it’s not illegal for a person to hold it.

And when taken in conjunction with constant reports of anti-crypto moves, such as the proposed ban on Bitcoin mining, it’s clear the Chinese government holds a standoff approach as far as cryptocurrency is concerned. 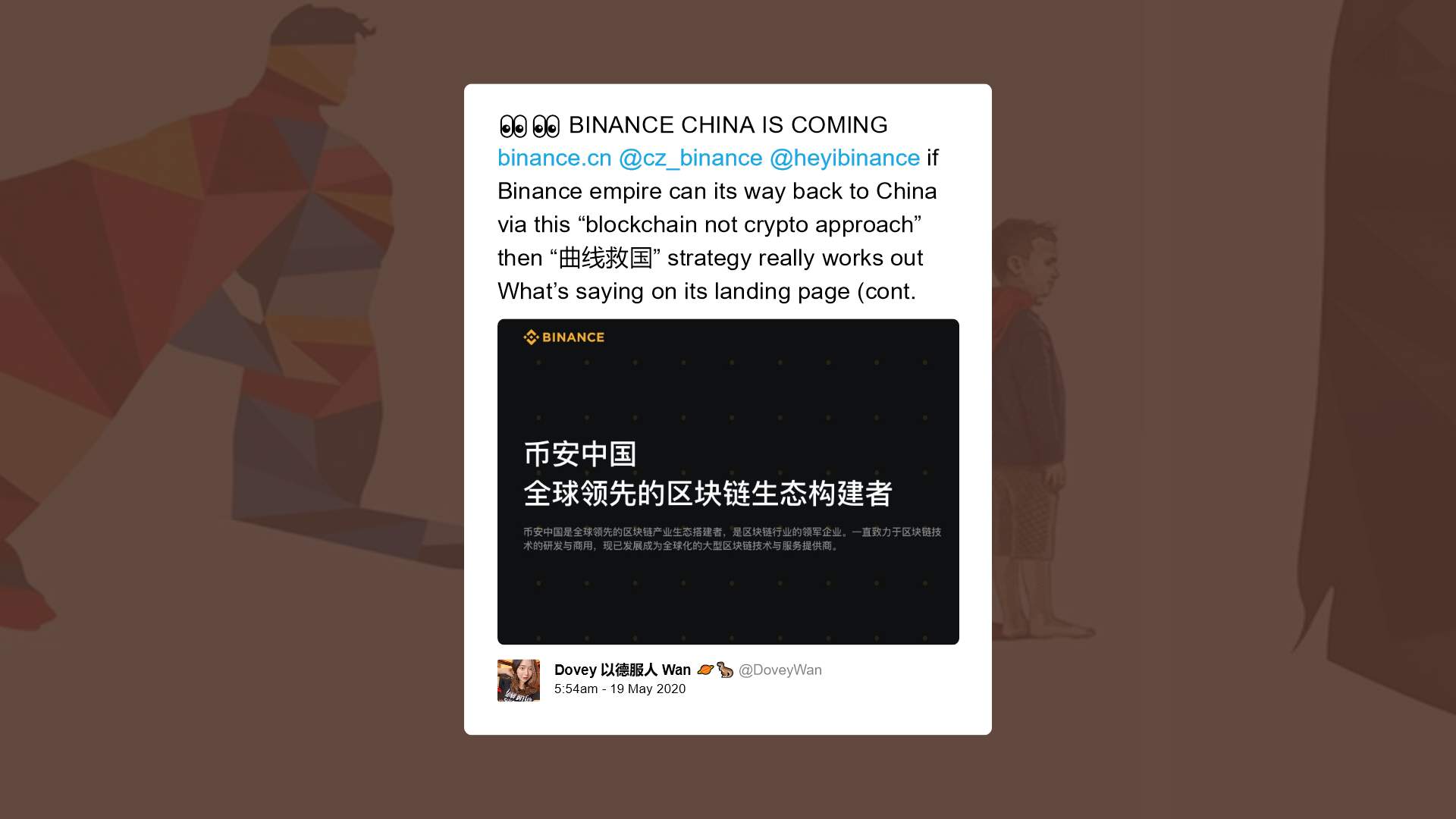 But before crypto advocates rejoice, Binance’s come back is mostly in respect of education, and not for trading at this present time. Dovey Wan, the Co-founder of blockchain investment firm, Primitive Ventures noted:

However, Binance CEO Changpeng Zhao was quick to chime in by hinting that trading on the China site could come at some future point.

One step at a time. Let’s focus on education and technology first. 😀

When it comes to crypto, the Chinese government holds a patchy record with regard to its endorsement. While many countries, including the US, are also cautious, most look to at least work with industry heads to coin appropriate frameworks.

This, of course, comes from a FOMO perspective, that is, a recognition of capital flight and loss of technological innovation from domestic shores. But China stands alone in that they hold no such qualms.

In fact, it’s been well-publicized on numerous occasions that the Chinese government is actively anti-crypto. For example, at the start of the year, Beijing renewed its tough stance by stating firms are not to engage in activities related to cryptocurrency.

This was reiterated by China’s central bank, The People’s Bank of China, which remarked that the trading of private virtual currencies, including Bitcoin and Ethereum, is:

However, it’s well known that public orders are often flouted in China. And while trading is deemed illegal, Chinese citizens employ a raft of means to buy and sell. These include using VPNs to access overseas exchanges, OTC, and P2P trading.

The Digital Yuan is a Play Against US Hegemony

Although Beijing maintains a tough approach towards the trading of digital assets, it still has massive plans in place to accelerate the adoption of blockchain technologies.

Most notable, from an international perspective, is the digital yuan. Talk of a…

(Bloomberg) -- Trouble may be brewing in China for Bitcoin’s raucous and divisive rally as the nation pushes ahead...

A portfolio manager at one of London’s leading hedge funds has warned that bitcoin, probably the best known cryptocurrency,...

The exchange's Wall Street listing could represent the beginning of cohesion between digital money and traditional finance. Free Book...

Artur Widak/NurPhoto via Getty Images Bitcoin will eventually be the world's currency because "you have to think it's going...