Bitcoin outperformed by stocks in past 12-months


Bitcoin’s financial independence has always been compared to the stock market and its performance has always astonished the users native to traditional markets. Even though the coin has been battling out the correlation battle, new data suggested that the stock market has performed better than bitcoin over the past 12 months, as the BTC market remained highly volatile. 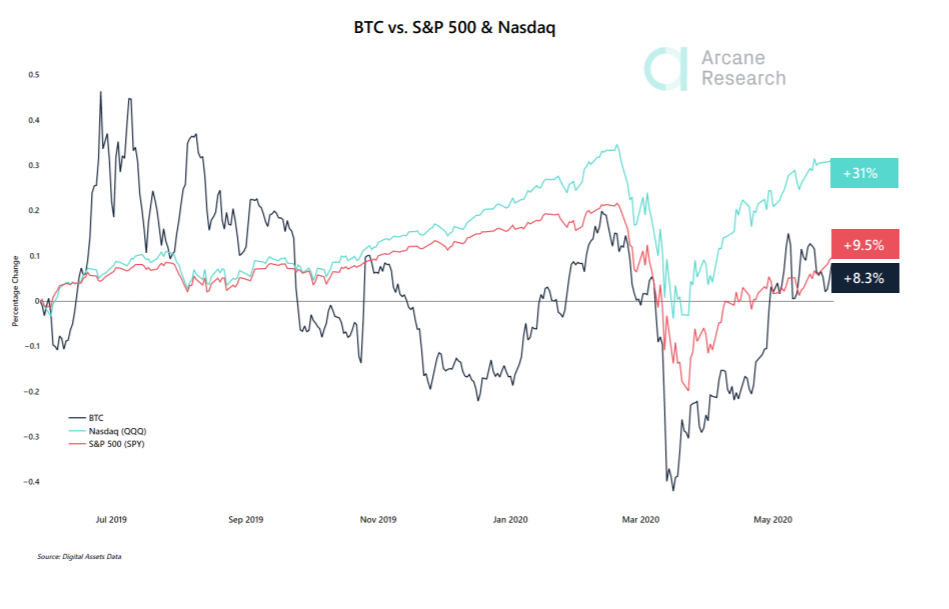 However, this was the case only while considering this time frame. In 2019, BTC price faced a terrible hit in the market around June and July, due to which the digital asset noted a slight decline in its returns. However, considering the 2020 market, BTC has outperformed the stock market by a good margin. Even historically, when the return compared to risk was considered the BTC market has significantly outperformed the stock market.

The uncorrelated property of BTC was looked upon as an added benefit for investors along with the scarcity and technological innovation behind it, making it a highly valuable investment option.

However, when compared to its own league of digital assets, altcoins may have taken a lead as May ends. The past week saw an upward rising trend as volatility crept in due to the expiration of futures and options contracts. As BTC makes up for the slow month, in the end, the altcoins like Ethereum are reaping benefits of a late bloom. According to data, ETH gained 12% in the past week, while Bitcoin SV suffered a loss of 0.54% in the past week and a loss of 4.88% in the past month, joining other worst-performing assets like Dogecoin and OmiseGo.

However, these short-term gains may be wiped away if BTC falls. The possibility of the largest digital asset falling could be high, as the report suggested that the current rising price was not supported by volume.

There have been strong resistances observed from $9k to $10k, and BTC has previously fallen prey to the pressure and slumped. As the market relishes in the potential temporary gains, the fear and greed index is once again increasing and getting closer to the greed state. This was the third time the indicator was moving towards greed and for an entire month has stayed away from “Extreme fear”, signaling a more confident and mature market.

Read more:Bitcoin outperformed by stocks in past 12-months