Bitcoin has been in an uptrend, but at this point, we are simply trying to consolidate the gains and figure out whether or not we can go higher.

Bitcoin markets have gone back and forth during the trading session on Thursday, as we continue to see a lot of noise in this market. While the US dollar has strengthened just a bit, but this does not seem to be affecting the Bitcoin market as one would think. With this in mind, I think that there is plenty of support underneath due to the ascending triangle, but perhaps more importantly we have the 50 day EMA underneath. Bitcoin continues to be very noisy in general as we had overextended for some time. The $10,000 level, of course, is an area that people will be paying close attention to, so I think that it is going to act as a bit of a magnet.

If we do break above the $10,500 level, then the market is likely to continue going towards the $12,000 level longer-term. At this point though, this is a market that continues to see a lot of volatility interest in that $10,000 level. The 50 day EMA underneath does offer support but I think there is even more support down at the 200 day EMA, and throughout the entire range of those two levels.

Bitcoin has been in an uptrend, but at this point, we are simply trying to consolidate the gains and figure out whether or not we can go higher. After all, breaking above a major resistance barrier takes a lot of work, especially after you had been somewhat parabolic. However, when you look at the totality of the move of the last couple of months, it certainly looks as if the buyers are trying to break out the market.

To the downside, if we were to break down below the 200 day EMA, then the market is likely to go down to the 50 day EMA, which is closer to the $7000 level. That of course would be a significant pullback, and I certainly think that a lot of value hunters would be involved. Bitcoin still has a bit of a cult following regardless of what happens, so I think in this sense it is a lot like the stock market, it is being supported by external forces that may or may not have anything to do with economic reality. Because of this, buying is the only thing that you can do in the intermediate-term. 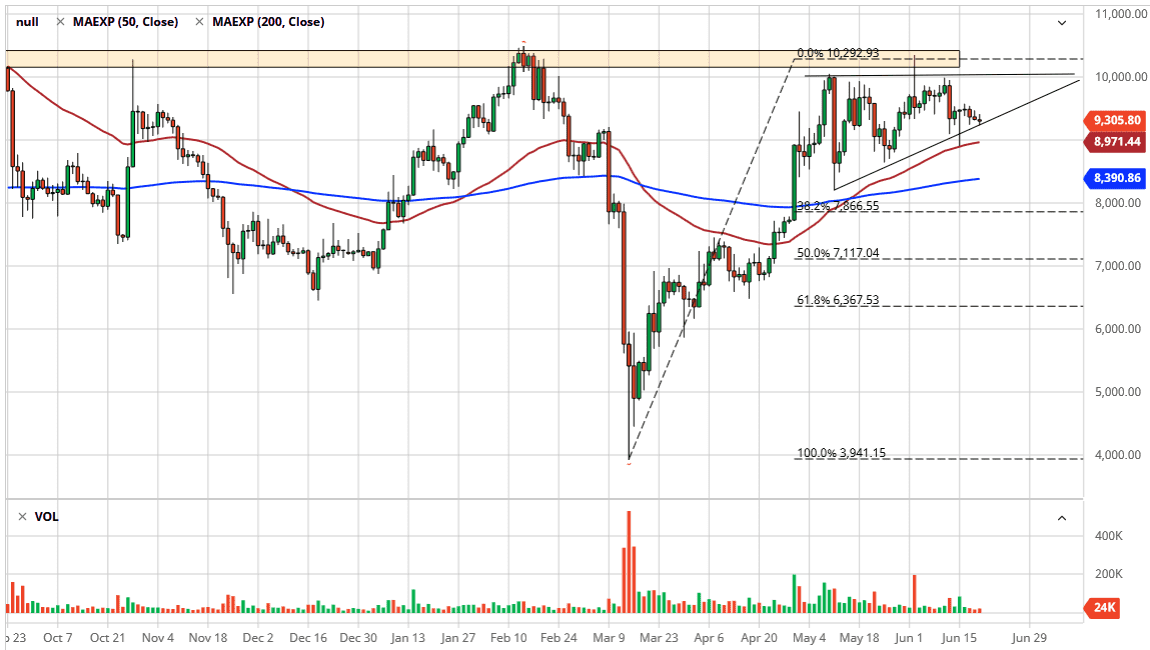 The bitcoin dominance rate (BTCD) has fallen below numerous long-term support levels, reaching its lowest value since 2018. The BTCD...

The crypto rally is taking a breather on Tuesday.Bitcoin, the most well-known cryptocurrency, was largely flat at around $56,000....

Merriam-Webster has a succinct new definition of an NFT

What is an NFT?When I answer this question, I take a deep breath and launch into a technical explanation...

This is a market that you cannot short, because it will continue to see buyers every time there is...

There will never be “artificial intelligence”… ever. Whatever you automate and record with Bitcoin, there will always be another...