Crypto Contrarian: Why Trading Bitcoin Based on Media Bias Is a Bad Idea | NewsBTC


In 2017, a perfect storm created Bitcoin’s meteoric rise to $20,000. The cryptocurrency went from relatively unknown, confined to the dark web and other corners of the internet the general public and institutional investors don’t pay close attention to.

Right under their noses, the asset had grown over a decade from $0.0008 to an all-time high of just under $20,000. No other asset in history has provided anywhere nearly as significant an ROI.

As mainstream media, Main Street, and even Wall Street learned of the life-changing wealth the new, futuristic digital currency generated, FOMO caused a frenzy of feverish retail buying of Bitcoin and other cryptocurrencies at any price.

Bitcoin’s Ripple Effect That Continues In Mainstream Media, Even Today

With Bitcoin seen as expensive at almost $20,000 per BTC, everyday Joes, grandmothers, and Gen Z teens began buying up altcoins hoping to strike it rich with the next Bitcoin.

Less than two weeks after Bitcoin peaked in December 2017, at the turn of the year, another well-known cryptocurrency was taking off. The cryptocurrency is XRP, commonly referred to as Ripple. Like Bitcoin, the asset became famous overnight. A Ripple forecast made headlines at CNBC, informing eager investors on How to buy XRP, “one of the hottest bitcoin competitors.”. 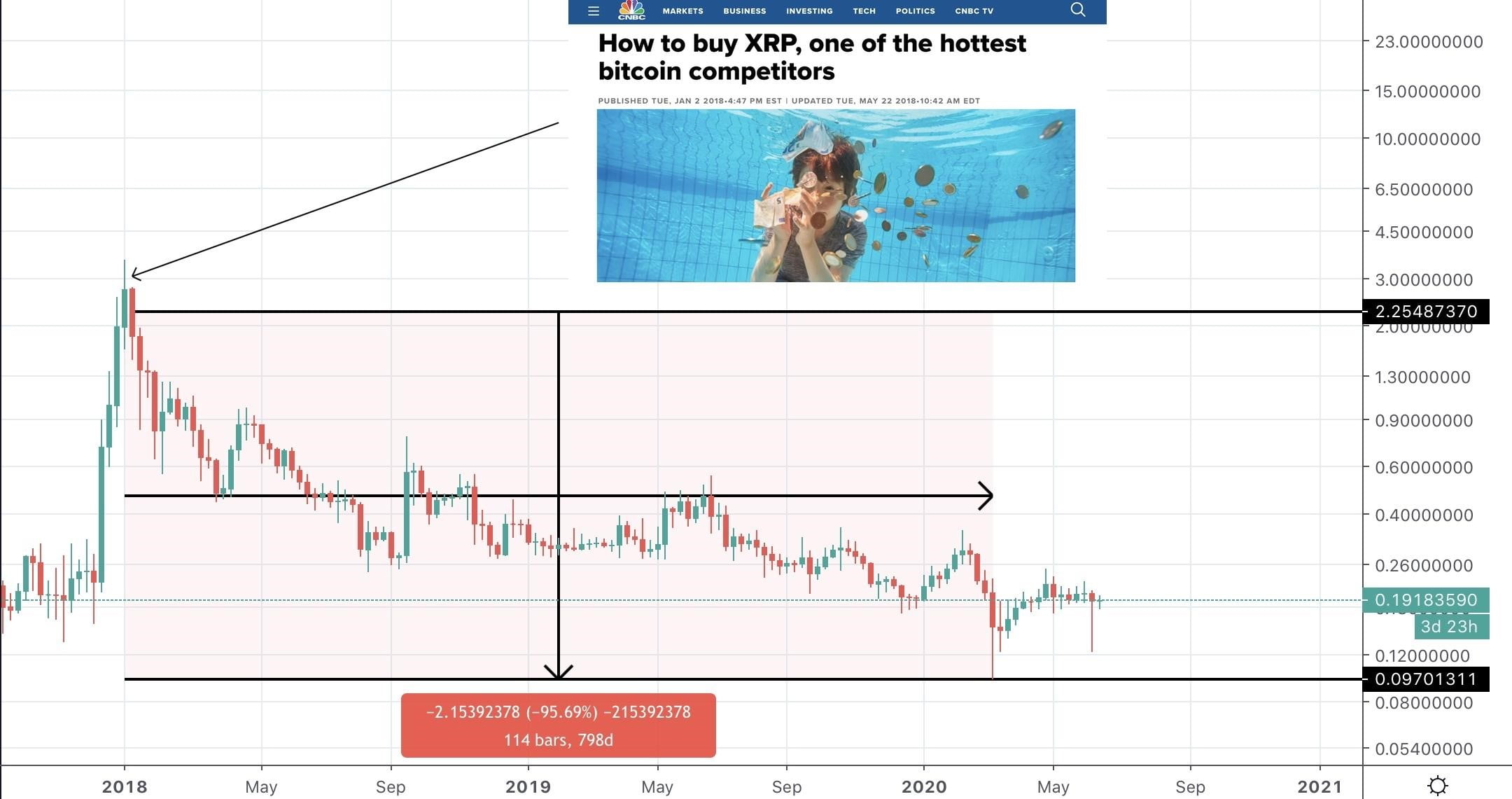 Ripple peaked and crashed days later, eventually reaching a 95% drawdown almost 700 days after the article ran. The article has since gone on in cryptocurrency history to become a long-running joke.

The article ironically includes a child underwater surrounded by coins. Any investors who listened to CNBC and bought XRP on that fateful day, is still underwater on their investment today.

It also started a recurring theme for CNBC essentially calling tops and bottoms in Bitcoin, based on their headlines and even their Tweets.

Each time the sentiment in headlines shifted, so did the short term trend in Bitcoin. 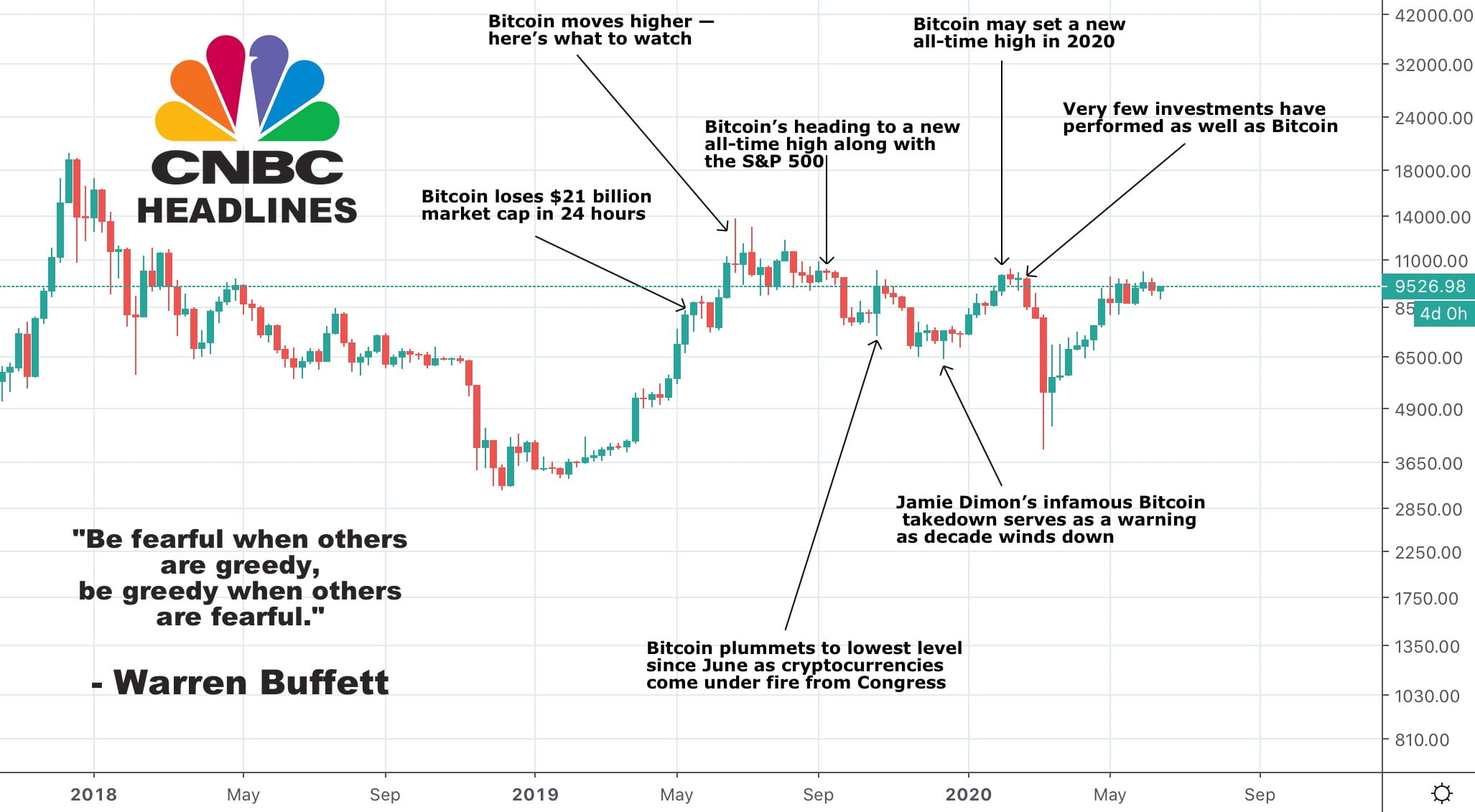 While CNBC is used as the example here, this same theme runs rampant throughout mainstream media and beyond. No media outlet is being finger pointed as a guilty party – this is contrarian market sentiment 101.

Many of the headlines listed in the chart above representing CNBC headlines, were also direct quotes from fund managers and institutional investors. These respected experts in finance, also got it terribly wrong.

Evidence Proves Trading Bitcoin Based on Media Is a Bad Idea

This evidence shows that listening to mainstream media on what Bitcoin might do next, is a very bad idea. Either media, smart money, and other big wealth investors also regularly make mistakes in their…

Read more:Crypto Contrarian: Why Trading Bitcoin Based on Media Bias Is a Bad Idea | NewsBTC

Bitcoin Has Crashed: Is This The End?

Bitcoin Has Crashed: Is This The End?

Revolut — the London-based, Russian-led $5.5bn fintech unicorn — appears to be having an identity crisis.Earlier this month the...

Brace yourself: The US dollar’s big crash has only just started

After an initial spike, the dollar has been falling steadily since the covid pandemic took hold in the US...

S&P Global: Cryptocurrencies Have Become Mainstream and Are Here to Stay, Bitcoin