Since the end of May and the beginning of June, Bitcoin has been in the range between 9,300 and 9,700 dollars. Yesterday, however, BTC lost $600 within a few hours, which seems to be the end of a period of low volatility. Despite yesterday’s crash, Bitcoin has stabilized today and is at $9,200 at the time of release, a loss of 1.31% in the last 24 hours.

As many have pointed out, there are two main reasons for the fall of Bitcoin (BTC) One of these reasons is the  correlation between Bitcoin and the stock market, in particular with the S&P 500. In recent months, the correlation was obvious and corresponded to a reaction of the markets to the COVID-19 emergency. As uncertainty increased and markets collapsed, investors tried to hold on to cash and sold their other assets, such as Bitcoin. This increased the selling pressure on BTC.

According to data analysis firm Skew, the correlation between Bitcoin (BTC) and the S&P 500 has increased since the end of April, as shown in the chart below. In June, the correlation between the assets reached almost 40% after a period of stability. In this sense, yesterday’s decline is linked to a sell-off in the stock market futures market. The Dow Jones fell by 2.72% or 710 points yesterday, which marks the worst day since the beginning of June. 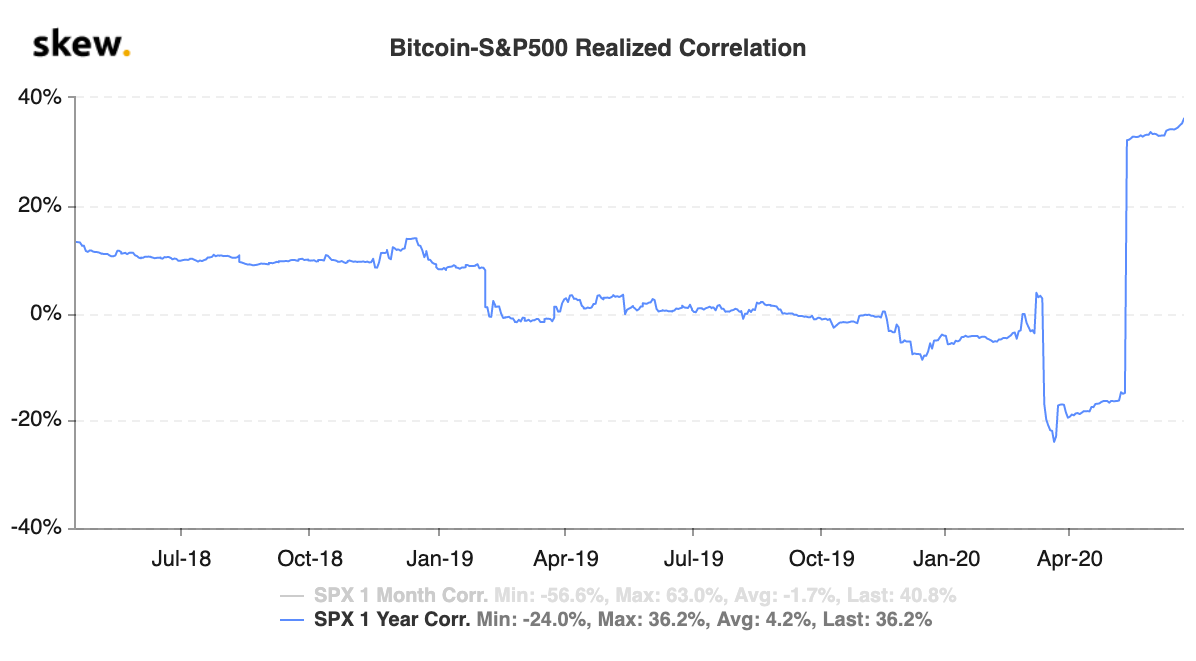 In addition, a note from Yahoo Finance points out that investors are reacting to growing uncertainty about the pandemic. Some regions in the western region of the United States are reporting a resurgence in the number of people infected. Similar events have occurred in China, Japan and some European countries, with some areas that had opened up having to be re-quarantined.

As a bonus, the International Monetary Fund published its economic forecasts for 2020. According to the institution, the worlds economic growth will fall by an estimated 4.9%. In addition, the economic growth of the United States, the world’s largest economy, will fall by 8% with predictions of a recovery by the first quarter of 2021. In that sense, it is pertinent to assume that Bitcoin (BTC) will remain correlated with the performance of the world economy, at least in the short and medium term.

The second reason behind the drop is the sale of Bitcoin (BTC) by its miners. As CNF reported, a few days ago there was an increase in Bitcoin’s mining difficulty. The increase was one of the largest since 2018 and has forced less efficient miners to liquidate their positions to compensate for the adjustment.

Because of that, BTC has been negatively impacted while the selling…