With respect to Basic Attention Token, the team at Santiment has revealed that BAT whales have been accumulating the token in the past week. In their first analysis shared on Twitter, they revealed that the top BAT addresses have added 5.94% of the total supply to their wallets in the past 5 days.

Furthermore, the largest non-exchange address holding BAT has accumulated the token in the last week and increased its holdings from $53.63 million BAT tokens to 126.92 million. To note is the accumulation by this address in the past week has been the largest in a three year period. The team at Santiment shared this analysis via a second tweet below.

What Next for Basic Attention Token in the Crypto Markets? 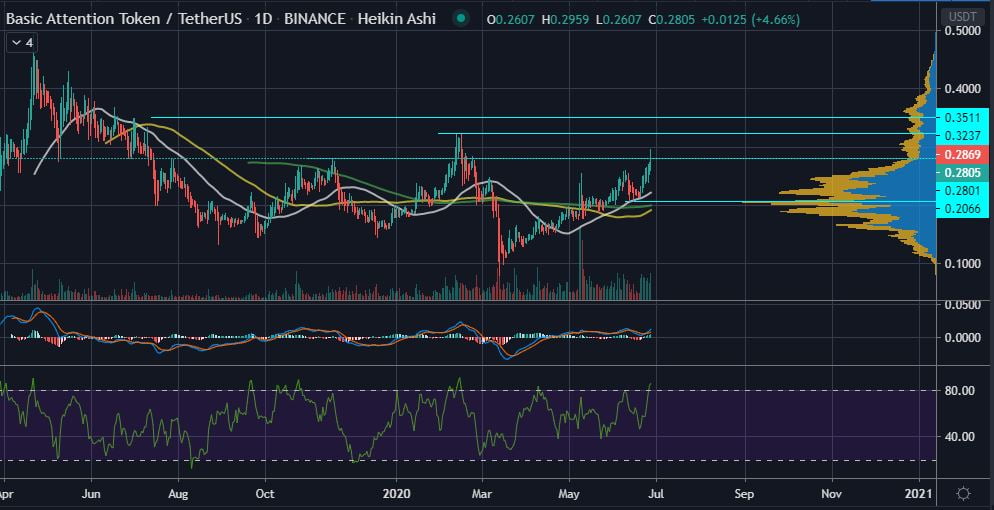 Taking a quick glance at the BAT/USDT daily chart courtesy of Tradingview, the following can be observed.

In conclusion, the past week has seen several whales accumulate Basic Attention Token (BAT) in a big way. As a result, the value of the token has increased drastically starting on the 20th of June when it was valued at $0.21 to its current value of $0.2868. A brief…

Lately, there’s been a lot more debate about cryptocurrency and how much energy it uses to be produced. Bitcoin,...

Just when it seems the ridiculous side of cryptocurrency cannot get any weirder, along comes Shibe Inu ($SHIB). While...

Bitcoin price experiences a steep correction after failing to slice through the $59,545 resistance. Ethereum price respected the MRI’s...

Cryptocurrency ethereum climbed to a new peak for a third straight day on Monday on continued optimism about further...

Elon Musk-run SpaceX is now accepting the new cryptocurrency Dogecoin to launch an upcoming satellite named DOGE-1 to the...