Bexplus provides BTC, ETH, LTC, EOS and XRP perpetual contracts for futures trading as well as 100x leverage. With its intuitive interface and demo account, beginners can learn to trade and improve their skills.

As the crypto world anxiously waits for Bitcoin to make a move, whether upward or downward, the lackluster cryptocurrency finally broke the $9,400 resistance, a level it has not visited since June 24. This gives hope to bulls who believe Bitcoin could return to $10,500 or even high.

Meanwhile, gold has witnessed a strong rally in the past few days, claiming a nine-year high of $1,809 per ounce, only 6% shy of its ATH of $1,917. Analysts believe the increased popularity of gold is the response to the ongoing pandemic and concerns about the global unrest.

Bitcoin has been called by many a “digital gold” due to its strictly capped supply and anti-inflation nature. While Bitcoin is regarded as an asset of high volatility, which is the total opposite of gold, its price movement seems like an uncanny delayed version of that of gold, and some traders have used gold as a benchmark to predict the movements of Bitcoin. 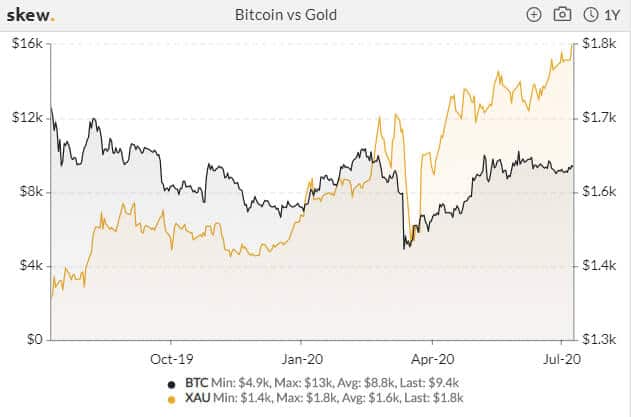 Goldman Sachs shows strong support for the precious metal, setting a 12-month price target of $2,000. Together with the booming stock market that has shown a correlation with Bitcoin’s price, Bitcoin is expected to gain momentum and make a revival.

Another positive factor is that more traders choose this time to enter the market as the number of hourly newly-registered Bitcoin addresses has hit a two-year high of 22,390. The increasing demand for Bitcoin is expected to add fuel to its rally. In a July report on cryptocurrency, Bloomberg envisions that Bitcoin could reach $12,000 in 2020.

At the time of writing, Bitcoin has been pushed back to $9,200 as the stock market and gold dropped slightly. But analysts believe Bitcoin could restore its bullish momentum if it could pass the $9,300 again.

How to Maximize Profit with Bitcoin?

Bitcoin is expected to garner strength from gold and regain its volatility soon. If you are waiting to make more money with bitcoin trading, you surely won’t want to miss this opportunity that could multiply your funds.

Using leveraged trading, we can long or short Bitcoin with the borrowed leverage from exchanges. For instance, with the 100x leverage, you can open a position 100 times bigger than your own funds. If Bitcoin appreciates by 10%, your ROI will be 1000% instead of just 10%.

Established in 2017 and headquartered in Hong Kong, Bexplus is one of the most user-friendly crypto exchanges. Bexplus provides BTC, ETH, LTC, EOS and XRP perpetual contracts for futures trading as well as 100x leverage. With its intuitive interface and demo account, beginners can learn to trade and improve their skills.

Technology is always changing, including the way we spend money. More people are buying into cryptocurrency and thieves are...

Image source: Getty Images Whenever you start a new thing, there are goof-ups, losses, chaos, and learning. The same...

Since most people are familiar with Android apps, it’s a lot easier to start investing in Bitcoin using the...

Should You Use Gemini to Buy Bitcoin?

Since Bitcoin (BTC) is the biggest cryptocurrency by a wide margin, it's also the easiest to buy. You can...