In a tweet on recent hacking of the high-profile accounts by bitcoin scammers, BitTorrent chief Justin Sun announced a bounty of $1 million on the hackers. Taking to its official handle, TRON Founder and BitTorrent CEO said that he will “personally pay those who successfully track down the hackers”.

Sun’s announcement comes after the spam messages from verified accounts promised Twitter users to double all payments sent to a Bitcoin address for the next 30 minutes, thus reportedly accumulated over $100,000.

While the tweets were constantly removed, a fresh load of spams emerged despite two-factor authentication set on the celebrity accounts.

“Currently, crypto Twitter appears to be facing widespread attacks from hackers. Dozens of Twitter accounts including CZ, Binance, @JustinSunTRON, and @TRONFoundationand many others have been affected. Please disregard any posts, comments, and/or DM’s from these accounts,” the BitTorrent account warning the users.

Further, it asked the users to “ignore any and all posts until future confirmation from TRON/Coin Telegraph”. It further added that they were “working closely with Twitter to rectify this issue immediately” and promised to keep the community updated. 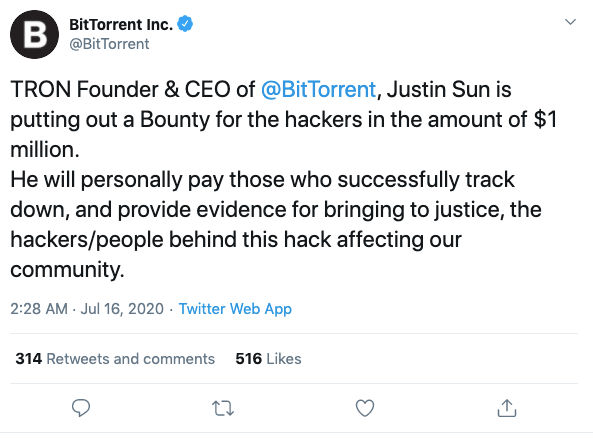 Read: EU Court Backs Apple In Case Over $15 Billion In Back Taxes

In a tweet just around 6 pm ET, Twitter Support wrote that it was “aware of a security incident impacting accounts on Twitter.” Further, it added, “We are investigating and taking steps to fix it. We will update everyone shortly.” In several tweets earlier, the spammers asked users to transfer cryptocurrency that “will be sent back doubled.”

One of the tweets read, “Only doing this for the next 30 minutes! Enjoy”. Immediately, a Twitter spokesperson wrote a tweet, saying, the team was “looking into this.

Read: How To Download Microsoft Teams App On Android? Know Everything Here

A Florida teenager has pleaded guilty to fraud charges after coordinating the hack of high-profile Twitter accounts to run...

Rule I: Do Not Carelessly Denigrate Governments Or BitcoinA reimagination of Beyond Order by Jordan Peterson through the lens...

By Hamdi Firat Buyuk Turkey’s Central Bank, TCMB, has banned the use of cryptocurrencies and other crypto assets for...

The Reddit forum famous for making GameStop’s (GME) stock price a household topic has banned all discussion of cryptocurrencies...