Bitcoin is moving based upon fundamentals, which makes the idea of going long much easier.

The bitcoin market broke down during the trading session on Wednesday, slicing through the $12,000 level like it was not even there. Even more impressively, the market broke above the $12,500 level, which was the most recent barrier. By the end of the day, we had even reach towards the $13,000 level. At this point, the market is likely to see buyers on dips, and I think that continues to be the playbook for Bitcoin.

As the stimulus is being expected out of the United States, that continues to drive the value of the US dollar lower, thereby having Bitcoin gain as a way to get away from fiat currency. For once, Bitcoin is moving based upon fundamentals, which makes the idea of going long much easier. At this point in time, it is difficult to imagine a scenario where we are likely to see the Bitcoin market easily shorted.

If we break down below the $12,000 level, I think there are still plenty of areas underneath that will attract a certain amount of attention, not the least of which would be the $11,000 level, extending down to the $10,000 level which is a large, round, psychologically significant figure that will also be further bolstered by the fact that the 200 day EMA is sitting there. At this juncture, I believe that the $10,000 level is essentially the “floor in the market”, meaning that if we were to break down below that level, it would have changed something quite drastically as far as the attitude is concerned, and with that being the case it more than likely could open up the floodgates. That would have some type of massive move into the US dollar, which would probably be some type of major “risk-off” type of situation. Because of this, I think that the market is one that you should be looking at dips as potential buying opportunities, and I believe that with all of the stimulus out there around the world, it makes sense that people would be trying to find some type of way away from fiat currencies, which bitcoin has become synonymous with. Ultimately, this candlestick is a bit of a “shot across the bow” showing that we are starting the next leg higher. I anticipate that the $15,000 level will be the interim target. 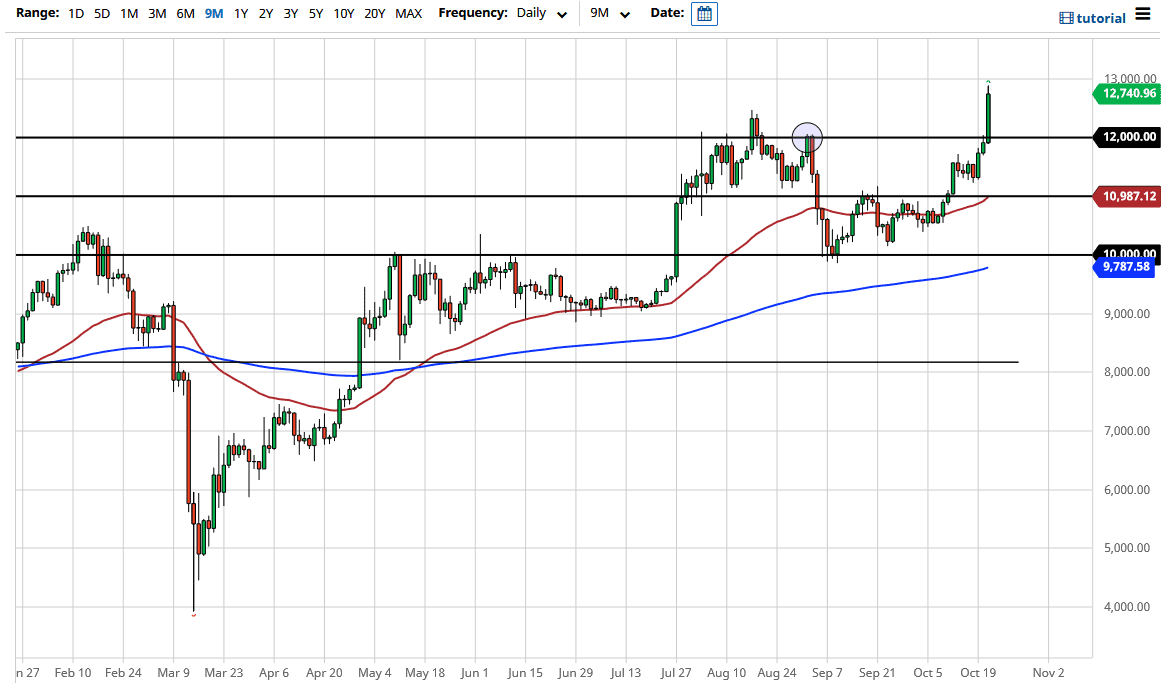 Yearn.finance’s YFI token has been surprisingly strong throughout the past few days, with its price holding well-within the mid-$20,000...

We probably have a rough couple of weeks ahead, and the volatility certainly looks as if it is going...

Bitcoin momentum stalled at around $19,400 as it began to slip into dangerous territory before breaking its parabolic trend...

The cryptocurrency market suffered a steep correction in the past 24 hours. Close to 200,000 traders got liquidated, losing...