It’s been a big week for Bitcoin.

At press time Bitcoin has held levels above $12,000 since Wednesday, and appeared to be on track to break through the $13,000 resistance.

Join your industry leaders at the Finance Magnates Virtual Summit 2020: Register and vote for the FMLS awards 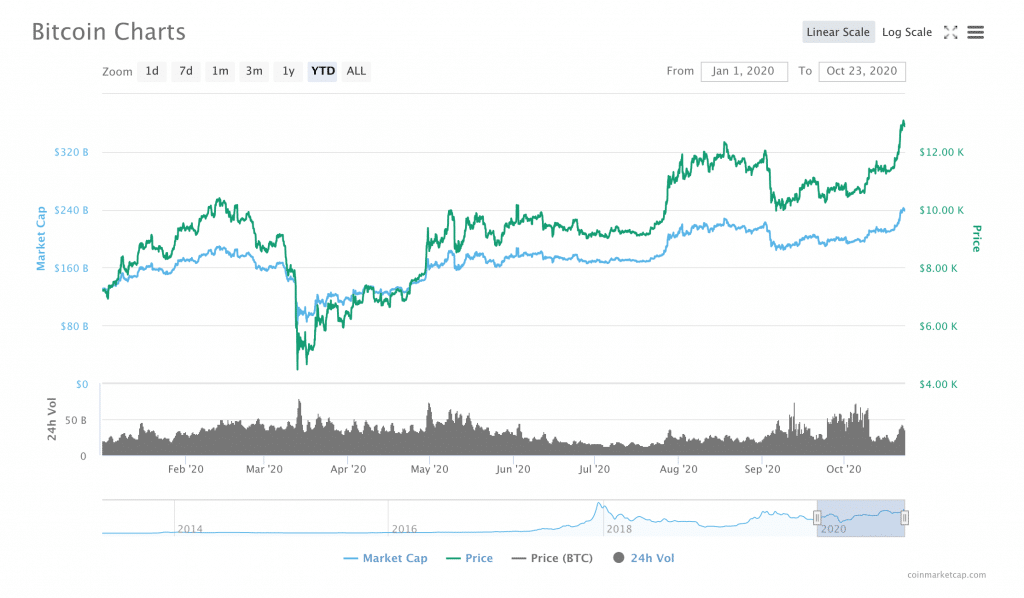 Will this time be any different?

Bitcoin has been gaining and plateauing throughout the year

For a number of analysts, the answer is yes.

In large part, this pass over $13,000 appears to have been the result of steady growth that has taken place over the course of the last seven months (or 10 months, if you don’t count March’s “Black Thursday” crash.)

Throughout most of this year, Bitcoin has oscillated between gaining and plateauing.

In January and February, BTC steadily rose from $7,000 to $10,300; of course, BTC crashed to roughly $4,000 in the second week of March–but by the end of April, BTC was almost completely recovered, continuing the along the upward trajectory that had begun to form earlier in the year.

After some light volatility in late May and early June, Bitcoin formed a plateau between $9,000 and $10,000 throughout most of June and July.

This pump is organically spot driven.

There is almost no order book resistance.

But this is a very healthy move.

Something we have never seen before at 12K plus #bitcoin.

The bull run that’s currently bringing Bitcoin over $13,000 began on October 18th, when BTC was at $11,400; BTC has made consistent daily gains since then.

If the pattern that seems to have been formed by Bitcoin’s price movements throughout this year continues, this latest upward move could result in a plateau.

However, it’s unclear whether or not the support to sustain a price level over $13,000 for more than a brief moment is there.

After all, while the latest bull run that has brought Bitcoin up from $11,400 to more than $13,000 started late last week, the continuation of the run appears to have been largely driven by an important piece of news.

On Wednesday, payments giant PayPal announced that its users would be granted the ability to pay…

Silver price is up for the first time this week as sentiment improves. The metal is up by 0.35%...

Bitcoin Cash price seems to finally catch up to the market reaching a price of $372 in the past...

PayPal’s recent leap into the crypto market is helping to drive the current bitcoin (BTC) rally, according to Pantera,...