The bitcoin market initially fell during the trading session on Thursday, reaching down towards the $13,000 level before recovering. We have bounced towards the $13,500 level, which is where we have seen a lot of resistance previously. This is a market that is very bullish, and I have no interest whatsoever in trying to short it because of the bullish trend. The Bitcoin market is one of the better performing ones right now, and therefore it is a bit ridiculous to try to short it.

The $4000 level underneath should be massive support, as it was a previous resistance barrier that we have broken above. The fact that we have not come back to retest that area suggests to me that we could have a sharp pullback. If that happens, that is only going to end up being a buying opportunity.  I do believe that somewhere near the $12,000 level is where a lot of buyers will return, especially as the 50 day EMA is starting to race towards that level. Remember, central banks around the world will continue to flood the markets with liquidity, and therefore it means that people will be trying to buy other assets such as Bitcoin in order to protect their wealth.

To the upside, I see the $14,000 level as a significant resistance barrier, but one that I believe eventually gets broken above. When you look at the chart, it is very easy to see that the market does tend to move in $1000 increments, so the fact that the $1400 level has offered a bit of resistance should not be a huge surprise. Looking at this chart, I think that it is obvious that selling would be a great way to lose money, and I do think that Bitcoin will continue to see a lot of people flooding into it. Bitcoin is starting to make headlines again, so that brings in a lot of retail money. However, at this point it makes quite a bit of sense that we will eventually find a reason for Bitcoin to pull back rather sharply, as it typically will do. I do believe that the $15,000 level is going to be difficult to overcome, simply from a psychological standpoint, but I also look at it as the longer-term target from what I see. 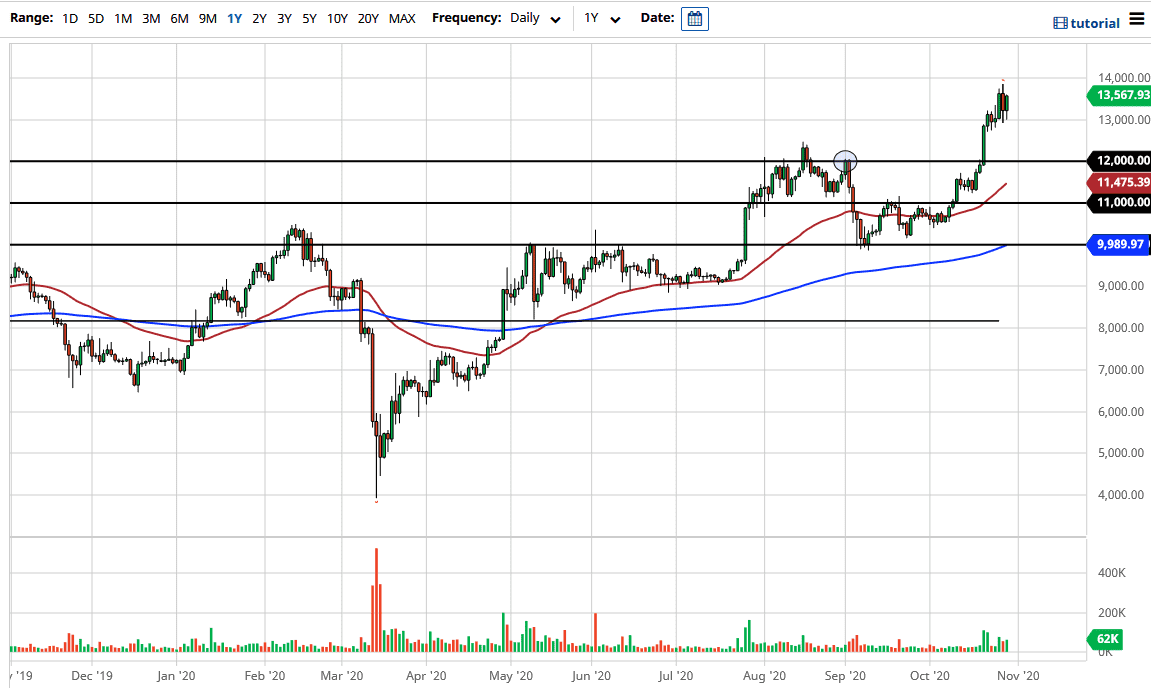 The price of bitcoin took a bit of a dip, though overall market sentiment remains bullish. Ether’s correlation to...

The current Bitcoin (BTC) bull run could send BTC/USD as high as $590,000, one indicator forecast this week.Curated by...

Solving the crypto-fiat conundrum: how banks can offer a premium and trusted

PayPal recently announced that it will enable US users to buy and sell crypto currencies in early 2021. This...