U.S. stock markets finished the first week of 2021 with yet more gains as investors, still high on hopes of even more federal stimulus and a less tumultuous political landscape, managed to slog through several disquieting developments.

Daily COVID deaths on Thursday eclipsed the 4,000 mark for the first time, and the White House coronavirus task force warned of a “USA variant” that might be more contagious.

That comes as the Labor Department announced a decline of 140,000 jobs in December – the first drop since April and far worse than the 50,000 nonfarm payroll gains expected.

“Most of this drop was concentrated in leisure and hospitality, as new lockdown restrictions were introduced or expanded in different states,” says Gene Goldman, chief investment officer at Cetera Investment Management. And because the report only reflects payrolls through mid-December, before many restrictions were introduced, “the February report will likely reflect more of those job losses.”

“It appears the ongoing battle against the pandemic is putting pressure on the real economy once again and despite what financial markets are signaling, the labor market is indicating there is still a ways to go on the economic road to recovery,” says Charlie Ripley, senior investment strategist for Allianz Investment Management. “Overall, the ability for Congress to provide additional fiscal support has increased and today’s employment report simply beckons them to do so.”

But additional relief might not necessarily be on the way. Sen. Joe Manchin (D-W.Va.) bruised hopes for further stimulus Friday, telling The Washington Post he is “absolutely” opposed to a round of new checks, though he later clarified he would support stimulus targeting people in greater need.

Other action in the stock market today: 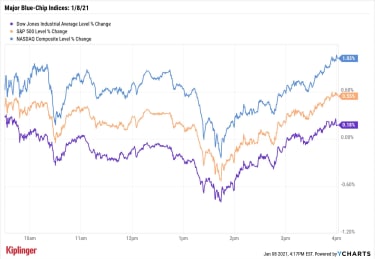 A Banner Day for Bitcoin

Also setting records Friday (and for the past month, for that matter) was Bitcoin, the digital currency that has once again captured Wall Street’s attention.

Bitcoin, as well as other digital currencies, remain highly speculative assets that only those with strong risk appetites should entertain; risk-averse investors may find themselves more…

Lucas Jackson/Reuters Bitcoin fell as much as 11% on Thursday after a report from BitMEX Research suggested a critical...

This report is an essential reference for who looks for detailed information on Global Bitcoin & Cryptocurrency Wallets market...

On Tuesday, Ether (ETH) underwent a bullish breakout which propelled the price to a new all-time high at $1,428. While...

In briefNVIDIA makes graphics processing units for video game consoles and other hardware. It was sued by investors in...