Any pullback towards the $40,000 level should be a potential buying opportunity.

Bitcoin rallied again during the trading session to capture an all-time high at the $48,178 level on Tuesday. This was on the back of Tesla announcing that they had purchased $1.5 billion worth of Bitcoin and would be taking Bitcoin as payment. This brings a lot of hope into the markets that Bitcoin will be adopted more widely, and a large company like Tesla will capture a lot of that attention.

However, I believe that we will eventually pull back, not only due to the fact that we are parabolic, but if you think about it, the idea that Tesla is going to accept Bitcoin as payment is a bit of a stretch as far as reason enough to go higher. After all, there is only certain amount of money that will flow towards Tesla; let us not forget that they continue to lose money, but at the end of the day there is no point whatsoever in paying Tesla with something that is more than likely going to go up in value over time. As far as Tesla is concerned, it is a great business decision, because there is a good chance that Bitcoin will double again. If it does, it is like selling two cars instead of one.

Unfortunately, Bitcoin is far too unstable to be actual money, so it still remains a speculative investment. From a technical analysis standpoint, we are obviously very bullish and there is no reason to fight this trend. I think that we will probably go looking towards the $50,000 level, which is a large, round, psychologically significant figure, and you can say the same thing at the $40,000 level. The $40,000 level was significant resistance previously, and now it should be significant support. Because of this, I think that any pullback towards that area should be a potential buying opportunity. After all, “what was once support becomes resistance and vice versa.”

If we break through the $50,000 level right away, I would be concerned as it would be a massive parabolic move. If you look at the consolidation area that I have marked on the chart, it measures for a move towards the $50,000 level. That is another reason to think that we will get to that level, in addition to the simple fact that there is a lot of “FOMO” out there. 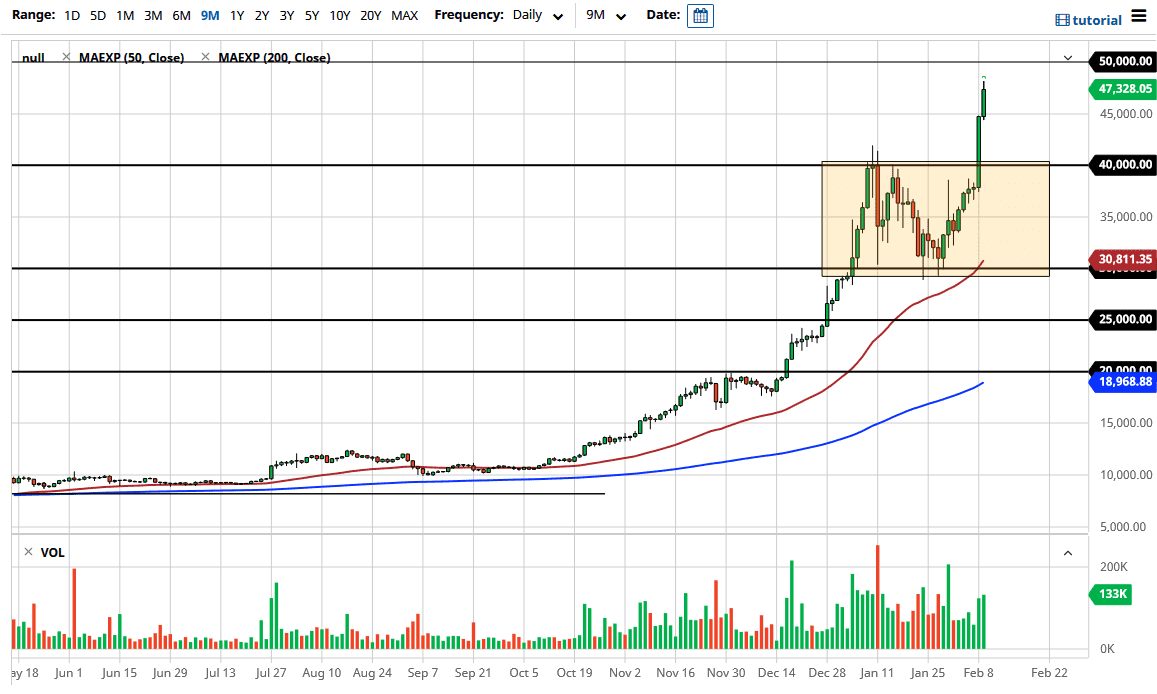 Bitcoin took a breather on Tuesday after a near-20% price rally over the past few days. The cryptocurrency declined...