It wasn’t to long ago that Cardano (ADA) was oscillating between the 13th to 9th place market cap position. However, that has changed over the last month. Cardano’s growth and increase in valuation has been staggering. Last week, Cardano gained a whopping +92.04% and this week it’s gained more than +30%. In the first 10-days of February, Cardano has gained nearly 150%, moving from a monthly low of 0.3291 to a new 3+ year high of 0.9112. There are a little over three weeks left in February, but if Cardano were to close at its present level (0.8533), it would be the highest close in its history – the prior all-time high close was 0.7203 in December 2017. Cardano is on it’s fourth straight month of gains. It’s easy to forget Cardano was trading at a low of 0.0868 in November and has a nearly +1,000 percent gain from the November lows. From the Covid crash lows, Cardano is up – wait for it – +5,243.06%! 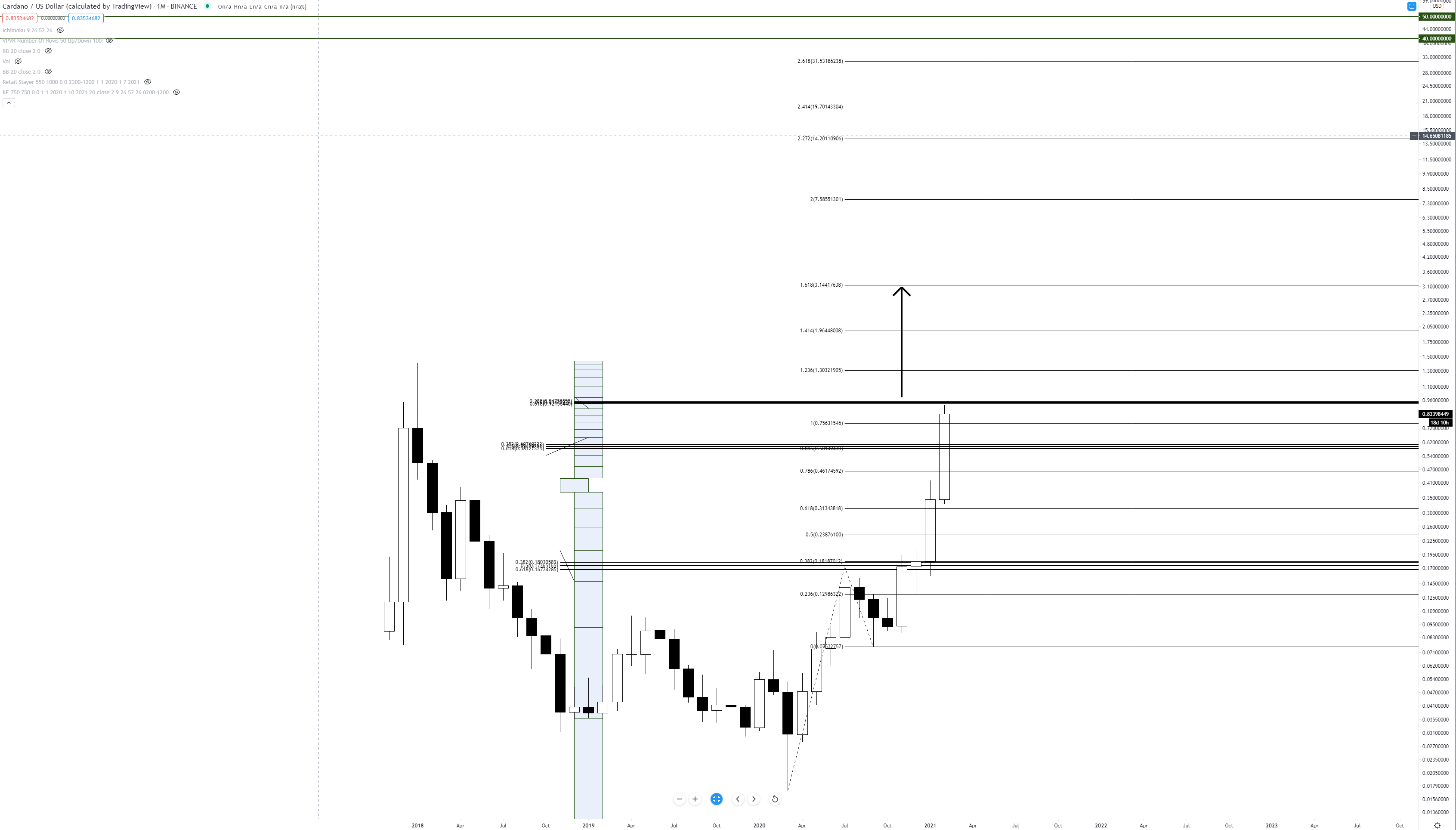 But how sustainable is this rise? No one really knows. Personally, I’ve been taking profit on the move up. I took some off the table at 0.71 and again at 0.84. I am not a big fundamental person, but Cardano has extremely powerful fundamental data on its side that justifies not only this current rise, but a valuation that would be 10% above Ethereum’s current market cap is considered to be a fair to conservative valuation. That would put Cardano at around the $6 to &7 value area. I’ve gone into some specifics on why Cardano could reach these levels, but in a nutshell Cardano makes Ethereum moot – one more update and we’ll have the most decentralized, efficient and important blockchain in the world.

From a technical analysis perspective, Cardano could very well keep moving higher. The image above shows three zones of three closely packed horizontal lines. Each of the cluster of lines represents a Fibonacci cluster. If we were looking at a standard chart, we would see the distance between each cluster to be equal – but Cardano is an instrument that requires the use of a logarithmic chart, where price moves are proportional. If you were to look at the present trading level of 0.83 on a normal chart and compare it to where the all-time high is at, it looks almost impossible. But on a logarithmic chart, its just a stones throw away. If you look at the Fibonacci cluster just above the current monthly high, you’ll that the next major resistance level is near the all-time high: the 123.6% Fibonacci extension at 1.30. Next Fibonacci extension is the 141.4% level at 1.96. But we could very well skip the 123.6% and the 141.4% levels to move all the way to the key Fibonacci extension of 161.8% at 3.14. $3.14 is a value area I would definitely take a good chunk of my…

Bitcoin price crash – what is happening to bitcoin?

The director of the Netherlands’ Bureau for Economic Policy Analysis, a part of the country’s Ministry of Economic Affairs...

Bitcoin price crash – what is happening to bitcoin?

The CEO shared the meme, quote-tweeting is with ‘#Bitcoin’ and a broken heart emoji.He then posted another ambiguous tweet,...

JPMorgan Predicts Bitcoin’s 2021 Slide Not Yet Over

A team of strategists for JPMorgan, headed by Nikolaos Panigirtzoglou, believes bitcoin (BTC) is seeing a weak demand from...

Why so much volatility? Cryptocurrency’s weird relationship with weekends explained

Price volatility is one of the major reasons why cryptocurrencies are criticised across the world. Late in May, HSBC,...