Waiting for some type of value is probably the more responsible way to trade, but that is not exactly what Bitcoin is about most of the time.

The bitcoin market initially pulled back a bit during the trading session on Thursday to reach down towards the $51,000 level. The 51,000 level sits just above the crucial $50,000 level, so of course it will have attracted a bit of attention. The candlestick looks a bit like a “hanging man”, but it is not technically one until we break down below the bottom of it. That being said, it is very likely that we are going to continue to see a “buy on the dips” type of scenario in a market that is clearly running away. I do not like chasing markets like this, so I would be a bit hesitant, but it is obvious at the very least you cannot be a seller.

The $50,000 level is a large, round, psychologically significant figure, and now that we have broken above there, I think the idea of being above the $50,000 level is a lot less shocking. The volume is dropping a bit, so that does bring up a little bit of a red flag, but I think that the market has plenty of support down to the $45,000 level so you want to see some type of pullback and a bounce to get involved in.

To the upside, now that we are broken out of a $10,000 consolidation area between the $40,000 level and the $50,000 level, it extrapolates for another $10,000 after the breakout, giving a short-term target to the $60,000 handle. What I fear about this market is that sooner or later there will be a correction, and it will probably be pretty nasty. That being said, if you are a longer-term investor, you will probably look at that as an opportunity to add to your position. The 50 day EMA is all the way down at the $35,000 level, showing just how overbought we are, although a lot of bullish fundamental reasons have recently been stated as to what Bitcoin should continue to go higher. Nonetheless, gravity sooner or later comes back into the picture, and this market is overdone yet again. Simply waiting for some type of value is probably the more responsible way to trade, but that is not exactly what Bitcoin is about most of the time. 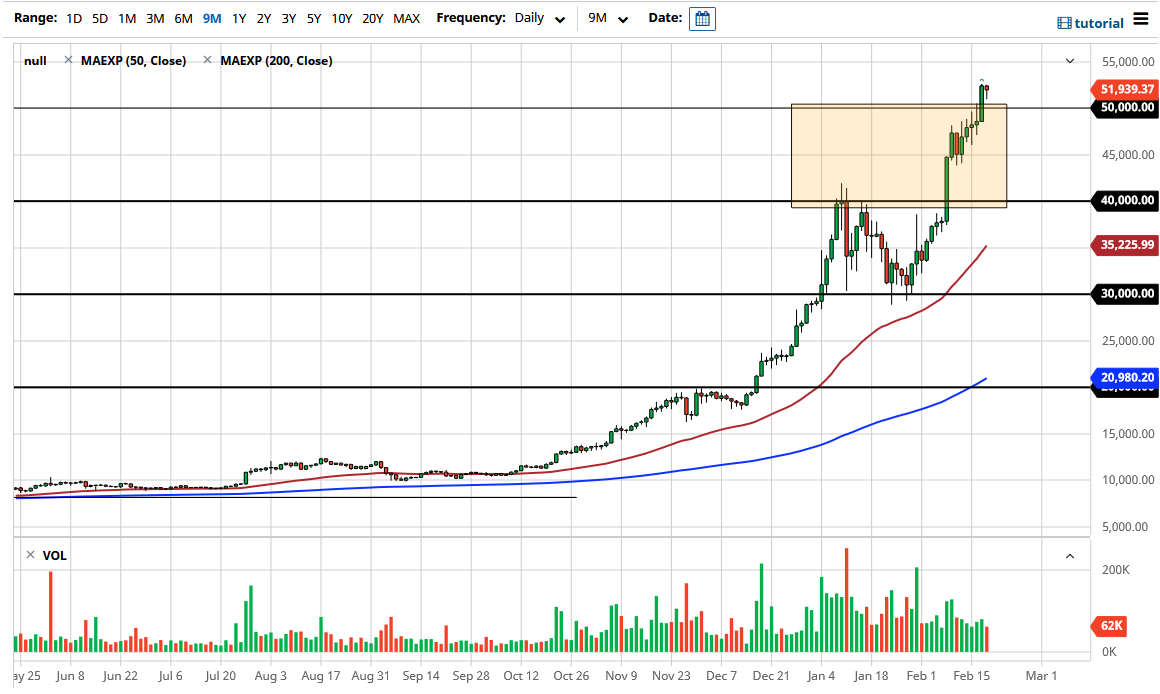 NOT FOR DISTRIBUTION TO UNITED STATES NEWS WIRE SERVICES OR FOR DISSEMINATION IN THE UNITED STATES VANCOUVER, British Columbia,...

ADA/USD has come off of its late February highs and speculators are likely looking at short-term support levels with...

The Bitcoin Optech newsletter provides readers with a top-level summary of the most important technical news happening in Bitcoin,...

There has been yet another update I’d like to point out, Square Financial, the owner of the Cash App...