I expect to ruffle some feathers with today’s MoneyWire, but I feel very strongly that you need to know this information. 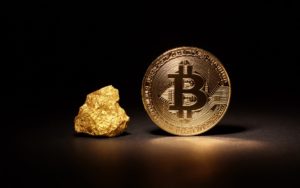 It really hit me during a recent online get together with my subscribers. I asked them whether they owned gold or not.

Holy smokes … I couldn’t keep up with the responses.

I’m not going to tell you to run out and sell your gold, but I do think it is not the holding it once was. It’s time to question whether to own it.

For my money, there’s a newer and better alternative investment. It has the same characteristics but a lot more upside potential …

Stocks slipped about 2% this past week — most of which came on Thursday. The Dow fell 559 points that day and the headlines screamed. The issue was increasing bond yields, which can signal higher interest rates and inflationary pressures.

For as long as anyone can remember, the go-to investment in times of rising rates and inflation has been gold.

Well, the SPDR Gold Shares (NYSEARCA:GLD) ETF was down Thursday and Friday, so that didn’t help. And over the past five years, it’s gained just 37%. That’s about a third of the S&P 500’s 96% gain in that same time.

I’ve been telling anyone who will listen about the enormous gains that are possible by owning cryptocurrencies. Bitcoin, yes, but especially smaller coins known as altcoins, which have even bigger potential.

Some gold is probably fine for your portfolio, but it is no longer the best hedge against inflation.

That title now belongs to cryptocurrencies.

Like gold, silver, and commodities, bitcoin and some altcoins serve as a store of value during turbulent conditions. In fact, they can be an even better store of value.

In bitcoin’s case, total supply is capped at 21 million bitcoins (and 88% of those have already been “mined”). Cryptos are basically next-generation software, so bitcoin is not a corporation or a government that bends to doing what’s easy or convenient in a given moment. Bitcoin has no president or CEO … no board of directors that can intervene and rain down cash bailouts on the over-spenders.

But that’s just a quick glance at why I believe bitcoin is superior to gold right now. Here’s a look at my five strongest reasons …

Supply: Both gold and bitcoin have limited supply, but the argument is more bullish for bitcoin over the long term.

Authenticity: Bitcoin and altcoins can be verified on the blockchain in a matter of seconds. Verifying gold takes much longer and is more expensive.

Transferability: Bitcoin is a digital asset, so it can be sent via the internet to anyone around the world with a connected device. Gold can also be transferred, but delivering a physical bar of gold is not easy (did I mention they’re heavy?) and definitely not safe.

Liquidity: Bitcoin is sold on any number of large, billion-dollar exchanges in a matter of seconds. Gold is not so easily converted into cash, making it a lot less liquid than bitcoin.

BeInCrypto –A look at on-chain indicators for Bitcoin (BTC), more specifically funding rates and open interest in order to...

NetNewsLedger – How to get free access here for trading profitable bitcoin

The subsequent stage in the bitcoin upheaval will be the normalization of trades where coins are exchanged. Bitcoin is...

US economy updatesSign up to myFT Daily Digest to be the first to know about US economy news. August...